The leadership at SLATE has just won the 2022 annual award for creating the best work environment at the University of Bergen. 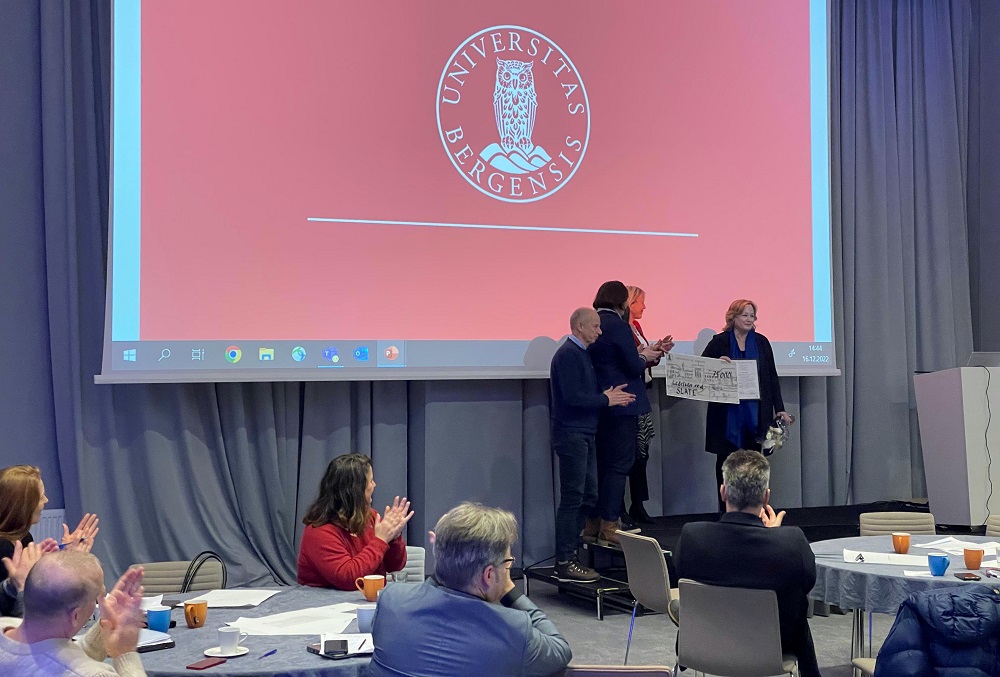 The leadership at SLATE has just won the annual award for creating the best work environment at the University of Bergen.

The Director of SLATE, Professor Barbara Wasson, our Head of Administration, Jorunn Viken, and our Theme Leader and Senior Researcher, Ingunn Johanne Ness, have all been working hard to create a good work environment at SLATE. We are so happy that their efforts have been recognized and honored with this award!

On Friday December 16th, Barbara Wasson accepted the award on behalf of the SLATE leadership. “Arbeidsmiljøprisen” can be awarded to individuals, faculties, departments, sections, groups and the like, and includes a diploma and prize money worth 75 000 kroner.

The news has also been covered in Norwegian by the Faculty of Psychology at the University of Bergen.

Last, but not least, is the leadership’s ability to give credit for and attention to both big and small achievements, so that all SLATE employees on all levels can feel valued, seen and appreciated.

«This was a wonderful message to receive from the HR Department at UiB!” says SLATE Director, Barbara Wasson. “At SLATE, we do research on interdisciplinarity, and we understand the major importance of interdisciplinary relations. We focus on noticing and including everybody at SLATE, which particularly inspires the next generation of researchers. This award lets us know that we have succeeded in our efforts.”

"My research," says Senior Researcher Ingunn Johanne Ness, "shows that relational aspects like openness, curiosity and respect, together with trust and psychological safety, are very important in order to succeed with interdisciplinary team work."

SLATE would like to thank the university and the jury for the award, as well as the anonymous people who nominated our leadership.

Thank you for this honor! It is the best Christmas gift SLATE could ask for!