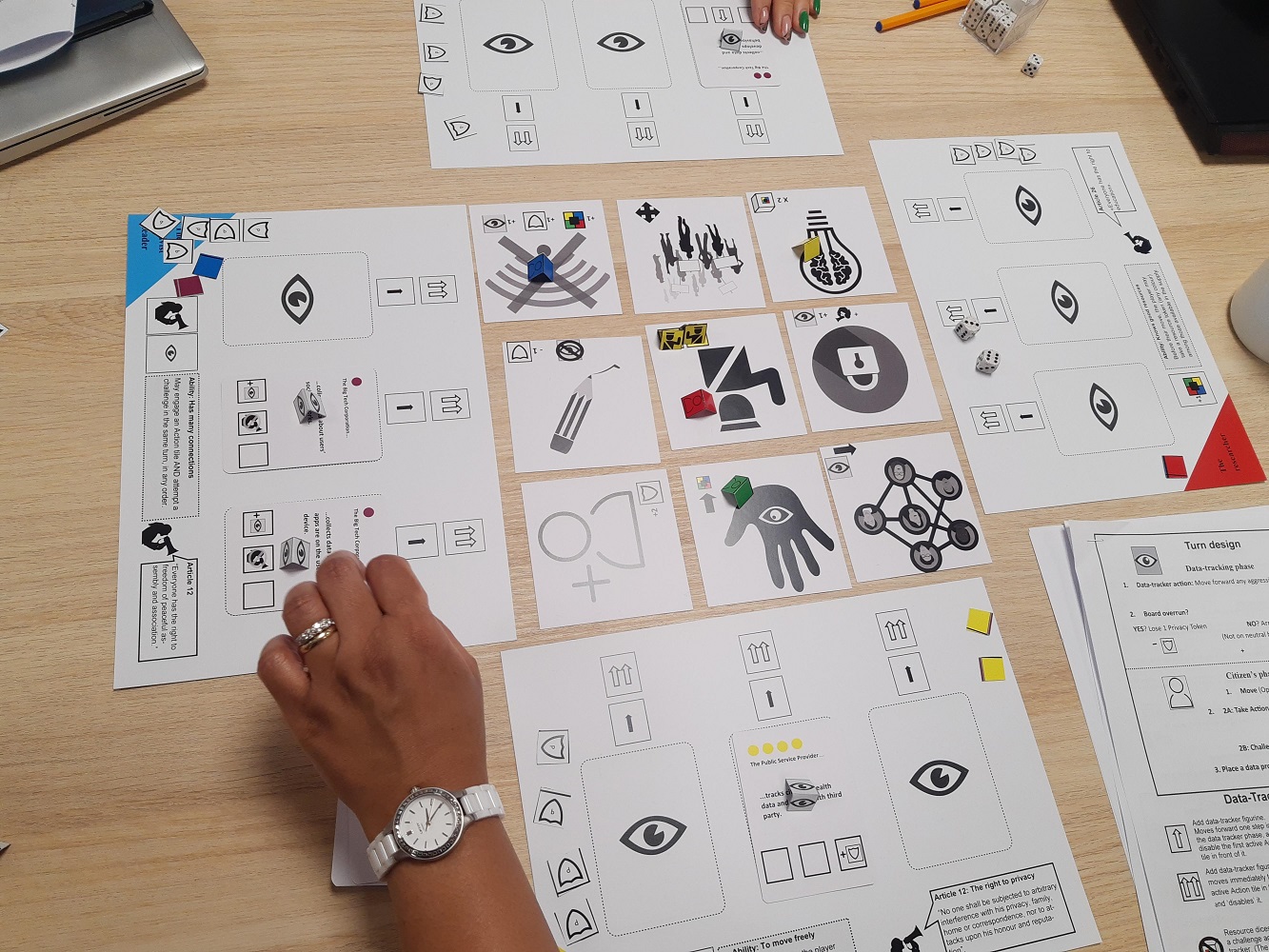 In September, SLATE arranged a participatory design exercise in Bergen, to test an early prototype of a board game developed as part of the Data Literacy for Citizenship (DALI) Erasmus+ project. The project aims to increase data literacy in adults by using game-based learning strategies.

The DALI project is a transnational collaboration between partner universities in Norway, England, Spain, and Germany: The University of Bergen, Coventry University, Universidad de Murcia, Universitat de les Illes Balears, and Friedrich-Alexander-Universität Erlangen-Nürnberg. The goal of the project is to support individual adults in different age groups so they can acquire basic training in data literacy, empowering them to take responsibility for their own and their children’s data. This happens through co-creating, piloting, and evaluating pedagogical strategies and a toolkit of games and playful learning resources, as well as methods for implementation with stakeholders that work with adult education.

The games developed as part of the DALI project include board games and digital online games. The games are currently being tested and adapted to suit the needs of the adults in each of the project’s target groups— young adults, general adults, seniors, and workers.

On September 28th, SLATE arranged a participatory design exercise to test a board game prototype at their offices in Bergen, Norway. This is only one example of the sort of game development and testing that is part of the DALI project.

In the Spring of 2022, DALI project members from the partner universities collaborated remotely (through Zoom and so on) in transnational teams. During this time, there was a period of initial game testing. After this, more thorough game testing began. Based on the feedback from test participants on each game, the DALI project adjusts the games.

Read more about the DALI game designing and testing process and the project’s future.

During the game designing process, the project partners have studied already existing games, such as snakes and ladders and memory card games, letting themselves be inspired by the game mechanics. For example, the game mechanics of the board game prototype that was tested in Bergen in September, is based on a game called Ghost Stories (2008), from the Belgian board game company Repos Production SRL.

Board Game Prototype Testing in Bergen

The participatory design exercise that SLATE arranged on September 28th, was part of the SEIS Summer School program, which was organised by PhD candidate Fredrik Breien. One of the board games developed by the DALI project was tested at SLATE’s offices in Bergen, and the participants were able to give feedback. The game that was tested was an early prototype of a paper board game.

The learning goal of this board game prototype is for the players to understand data activism movements. To win the game, the players must work together to take action to protect their data privacy and right to free speech, while resisting data-tracking events. Each DALI game has different learning goals related to data literacy, such as understanding how and why your data is being used, as well as learning ways to influence the data use. This board game prototype is only one example.

SLATE Researcher Fride Haram Klykken supervised the participatory design exercise in Bergen, gathering feedback. Klykken has also been involved in testing other games for the DALI project. During the testing exercise, Fredrik Breien and SLATE intern Geerte Koster assisted Fride Haram Klykken. Before the testing started, Klykken held a presentation about the game for the test participants.

The game testers were PhD candidates, associate professors and others from Tallinn University and Tampere University, who were visiting Bergen to participate in SLATE’s SEIS Summer School program.

Feedback from the Participants

The recurring positive feedback on the board game prototype that was tested in Bergen, was that the participants had fun while playing. However, it was a challenge to get started with the game. Many participants felt that game manuals should have shorter and simpler instructions that quickly explain how to set up the game, enabling players to start playing almost immediately. This is because it is easier to understand a game while in play than while just reading instructions.

Many participants wished for the player roles to be simplified as well. The target audience for the game is general adults, and most people who play the DALI games will be ordinary citizens, not experts. Therefore, instead of each person playing a distinct character with specific expertise, the participants wanted every character to simply be a citizen.

The DALI project will take this feedback and other feedback gathered during the participatory design exercise in Bergen and use it to further develop their games. For the DALI project, constructive criticism is worth its weight in gold when it comes to the game designing process.

A big thank you goes out from SLATE and the DALI project to the SEIS Summer School participants, for all their useful feedback.