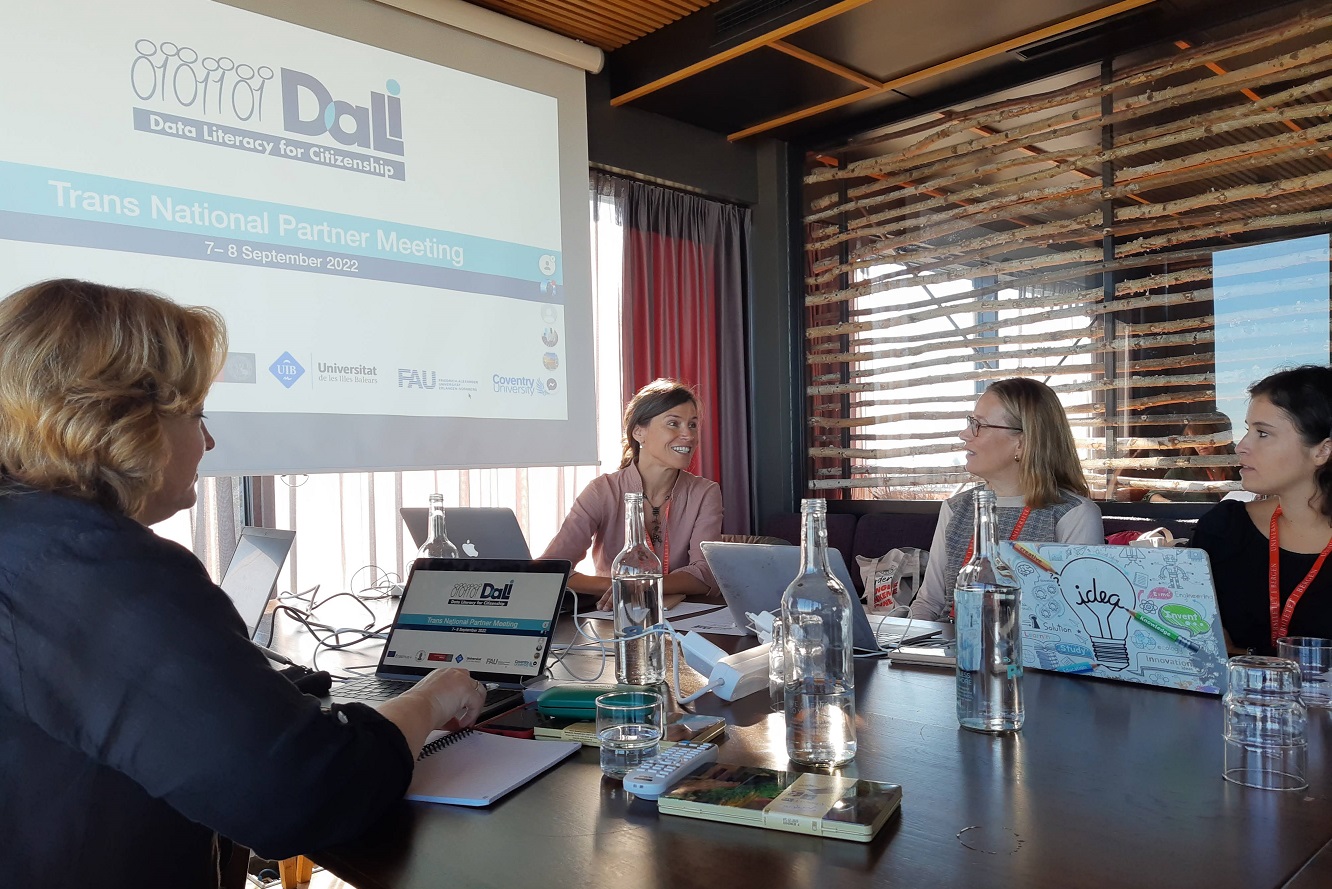 Adults are in charge of the social uses and regulation of data, both at home and in the education of young people— and in most countries, adults are legally responsible for their children's data. In addition, seniors encounter data in their daily lives, both as grandparents interacting with their families, and as citizens interacting with public services, such as tax or health systems.

The goal of the DALI project is to support individual adults in different age groups so they can acquire basic training in data literacy, empowering them to take responsibility. The project supports adult learners in acquiring and developing basic skills and key competences in informal contexts. This happens through co-creating, piloting, and evaluating pedagogical strategies and a toolkit of games and playful learning resources, as well as methods for implementation with stakeholders that work with adult education.

The DALI project is a collaboration between universities in Norway, Germany, Spain, and England. On September 7th – 8th, SLATE arranged a transnational DALI project partner meeting in Bergen, Norway. The purpose of the meeting was to discuss the progress of the DALI project, and further plan its future.

The games developed as part of the DALI project include both physical board games and digital online games. To ensure maximum availability, the DALI project aims to not only offer the digital games, but to give people the option of printing out physical copies of the board games themselves.

Currently, there are ten DALI games. Each game must also be adapted to suit each of the four target groups— young adults, general adults, seniors, and workers— as each group has differing needs. Thus, there will be forty downloadable and printable games. In addition, the project has developed five digital mini games, one board game, and one digital escape room.

The new DALI project website publishes updated information on the project activities, the people, and the research results of the project. The latest addition is the repository of data literacy resources, and the project is currently working on how to present the DALI framework. There are also plans to develop an online archive of the digital DALI games, where anybody should be able to visit the website and download the games for their own use.

The first day of the transnational partner meeting, September 7th, took place on Ulriken, a mountain with a panoramic view of the city of Bergen. When the participants had presented themselves and their research to the group, the focus turned to the current project activities, and the plans for what happens next. The conclusion was that the DALI project is on schedule.

Articles based on the research so far are waiting to be published. The first interim report was approved in March 2022. In September 2023, the last project partner meeting will be held, and the deadline for the final report from the DALI project is in early 2024.

Most of the DALI games are still at the evaluation stage, currently being tested. On September 28th, one of the DALI board game prototypes, developed by the University of Bergen and Coventry University, was tested at a PhD summer school on game-based learning at SLATE’s offices in Bergen.

Read more about the board game prototype testing in Bergen.

On January 18th – 19th 2023, the results of the game testing performed so far by the project partners will be shared at a new DALI transnational partner meeting at the Friedrich-Alexander-Universität Erlangen-Nürnberg. The game testing and development that targets the separate age groups will continue until May 2023. The focus of the January DALI partner meeting, however, will be policy recommendations and guidelines.

As part of the DALI project, questionnaires have been developed to gather relevant information about the participants who are testing out the DALI games— for example how often they play games, and how much experience they have with playing games— in addition to gathering data about their opinion of the games. One of the main challenges for the project has been that data privacy laws are not the same in each of the partner countries, making it difficult to design the questionnaires and manage the data. During the partner meeting in September, apart from discussing the project budget and time management in detail, the meeting participants spent much time discussing how to improve the questionnaires as well as the game designs.

As data privacy laws are so dissimilar in the partner countries, some of the game designers are considering compensating for these differences by adding QR codes to the board games. This would enable the players to use their smartphones to access relevant information on websites from each player’s country during the game. Several of the participants in the board game prototype testing exercise at SLATE’s offices in September, liked this idea.